Georgetown’s “Public Square” has been the commercial and cultural heart of the city ever since the original 52-block grid of uniform lots and blocks that constituted the new village was marked off and offered for sale at a public auction on July 4, 1848.  The initial 173-acre townsite has mushroomed in all directions since then, yet the downtown business district retains its vitality, its architectural charm and its symbolic significance.  Indeed, Georgetown’s Square represents one of the finest collections of Victorian commercial architecture found in the state today. Named in honor of master builder Charles S. Belford, this National Register Historic District boasts a cohesive grouping of Vernacular, High Style and Popular Style residences.  Indeed, the evolution of architectural forms and development patterns in Georgetown from the 1870s to the 1930s are chronicled within the district’s 8-block area.  Seventy-three of the district’s 81 structures are at least half a century old.  Most were constructed by Belford’s successful and well-reputed Belford Lumber Company.  Always insisting on exactness and high quality, Belford himself supervised construction details.  Wearing a suit and derby, he made his rounds carrying an umbrella, a piece of chalk and a plumb bob.  His versatility and competence as a builder are evident in the varying styles, scale and complexity of the well-crafted Belford buildings which endure today. During the 1890s, several of the city’s most financially successful and socially prominent families erected large Victorian frame residences in the area which now comprises this National Register district. Built within the span of a few years, the homes were developed on land which had been part of the Thomas P. Hughes ranch. Owners of the two University Avenue homes were Hughes’ daughters and their spouses, while the two Elm Street houses, so similar in style and in fanciful Victorian “gingerbread” detailing; were commissioned by families who were close friends. 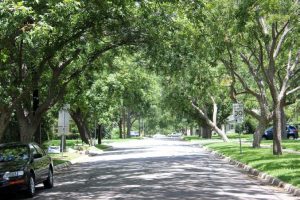 The Olive Street Historic District is a small, primarily residential neighborhood south of Southwestern University (SU) and east of downtown Georgetown, Texas. It was designated a National Register Historic District in 2013.  The resources within the district are located on both sides of Olive Street between East University Avenue to the north and East 17th Street to the south. The boundary also extends from Olive Street to the east on East 15th Street to Laurel Street. The 33 residential properties within the district boast several architectural styles and include a c.1880 vernacular I-house, a c.1885 Folk Victorian residence, transitional styles evolving from Colonial Revival to Craftsman bungalows, and more modern Minimal Traditional and Ranch style homes along a beautiful, tree-lined drive.  The earliest construction date is ca.1880 and spans to 1984, with a majority being built in the early-1900s. All of the houses are wood-frame construction on pier-and-beam or perimeter wall foundations. Exterior facades feature wood siding, brick masonry veneer, fiber cement wall shingles, and other combinations of materials.  Many of the houses were home to SU professors and prominent city figures beginning in the early 1900’s.